This year I wanted to get out and really concentrate on the spring aspen leaves.  While out shooting, I noticed the lupines were coming out a few weeks early.  So, I had plenty of subject matter to shoot recently.  Here is a small sampling of some of my favorites. 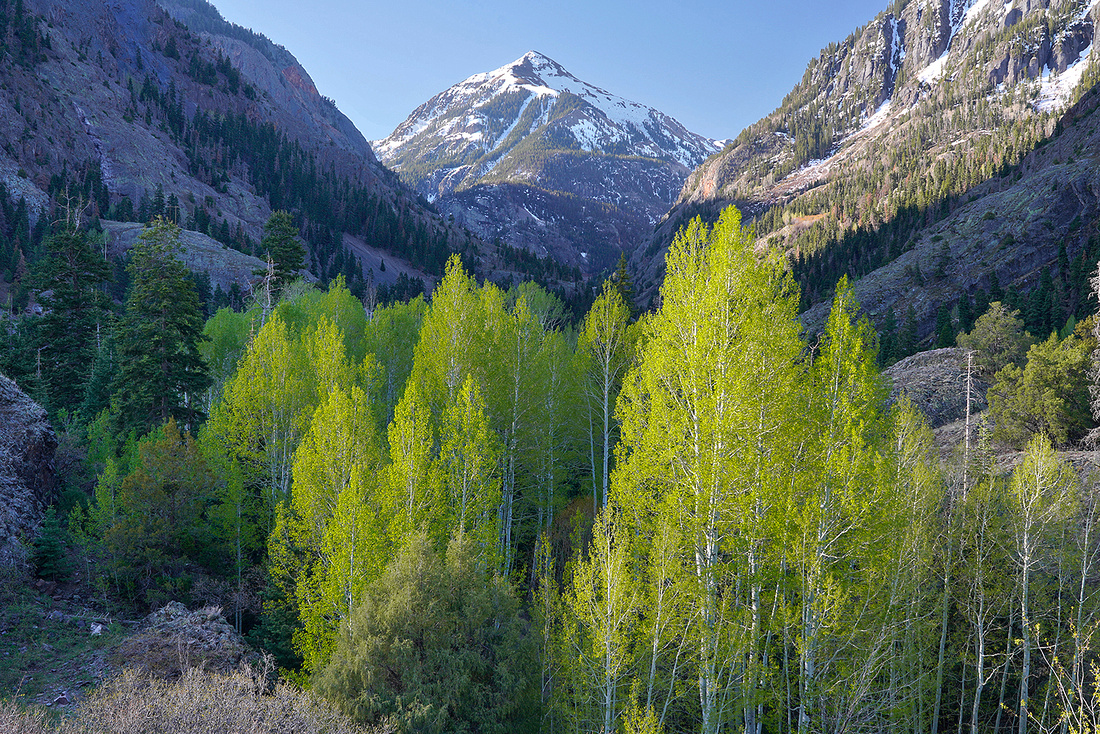 This is Abrams Mountain south of Ouray.  I waited at this location 2 hours for the first light to hit fresh aspen leaves.  I literally had seconds to get this image before the light lit up all of the trees. 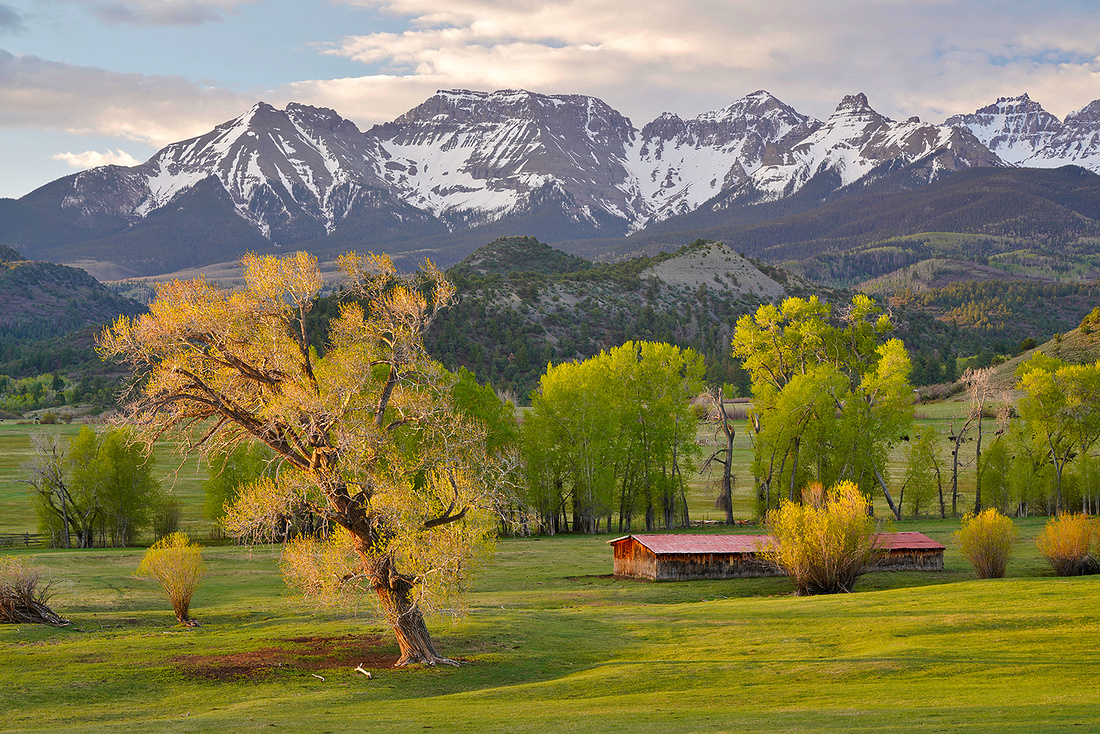 I was actually at another location for sunrise but figured if I hurried, I could get to this location when the first light hit trees.  This is literally right next to the highway west of Ridgway. 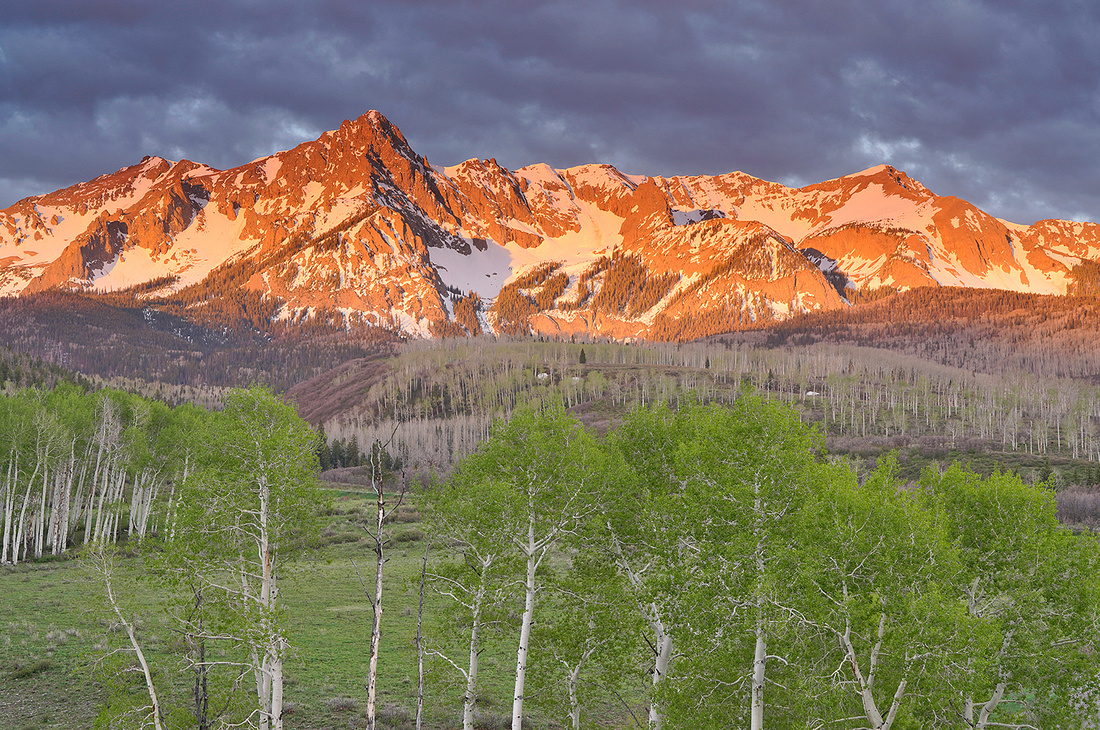 Everyone once in a while, we get a sunrise where it lights up the peaks like they're on fire.  This was one of those rare mornings.  The dramatic dark clouds added some nice contrast. 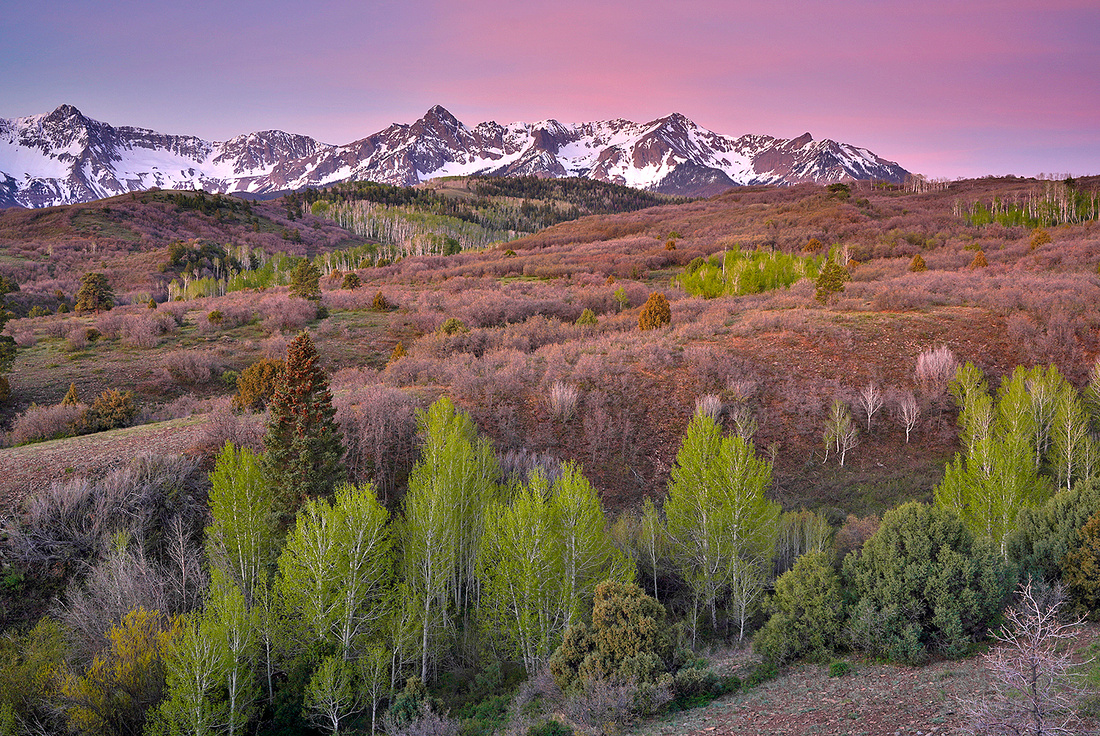 The Dallas Divide west of Ridgway is famous for it's fall colors.  There can literally be hundreds of photographers lined up at sunrise in the fall.  In the spring though, I had the place entirely to myself every single day of the 5 or 6 trips I made up there. 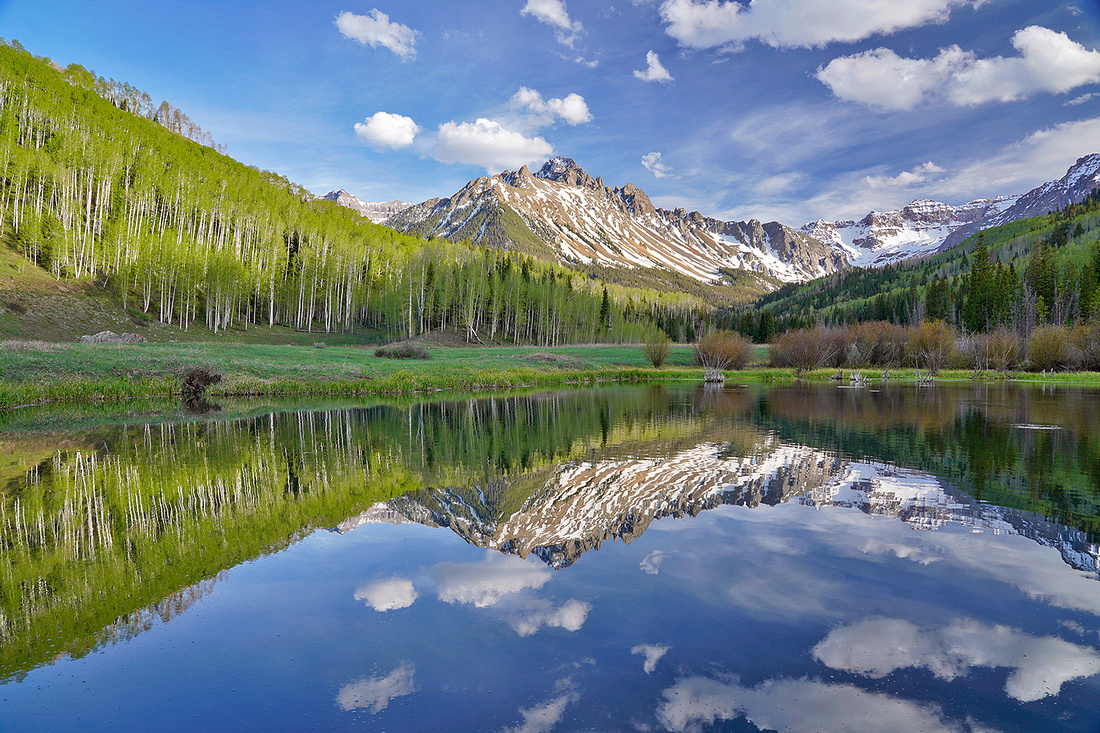 Mount Sneffels is definitely the most famous peak in the San Juan Mountains.  On this particular evening, I had nice clouds mixing in with the blue sky and fresh aspen leaves. 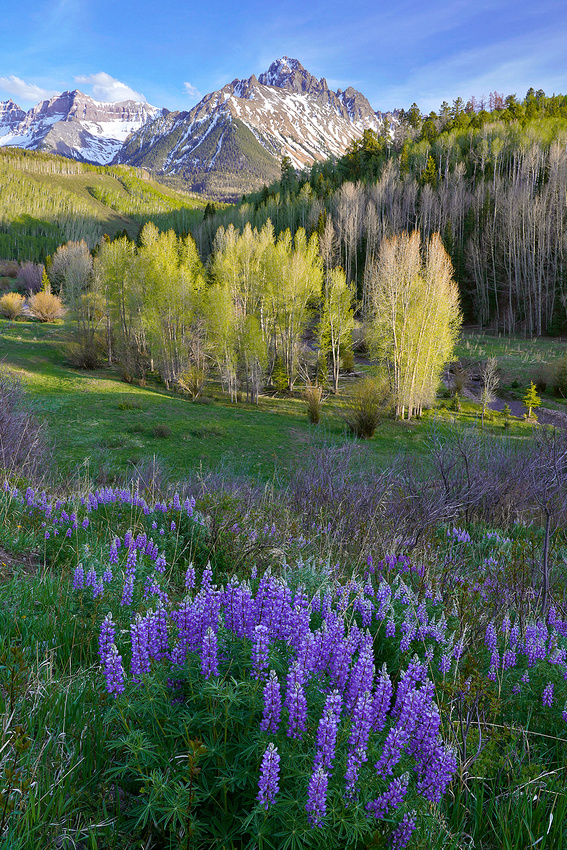 Mount Sneffels and lupine in spring 1

Here's another one of Mount Sneffels.  It's fairly unusual to get the fresh green aspen leaves and peak lupine at the same time. 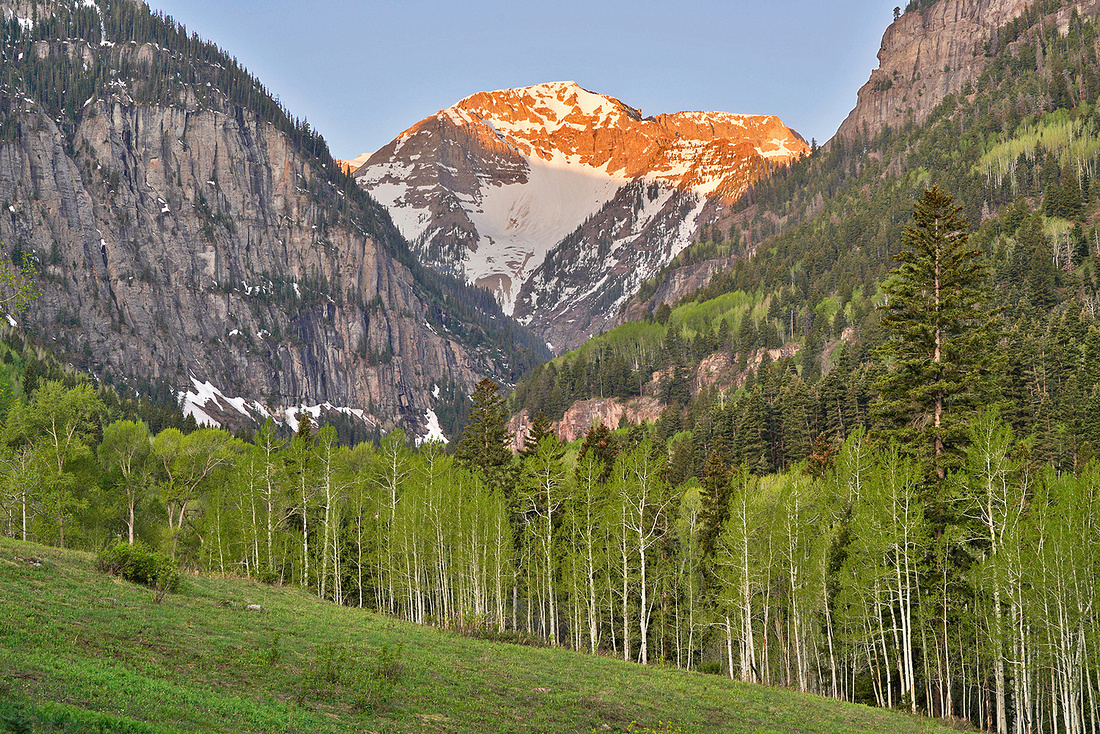 This is a shot that you probably won't ever see from anyone else.  I had special permission to go on this private property to get this image.  A minute after I took this shot, a large black bear wandered through the very left side of this scene.  He didn't cooperate and come down into the field for me. 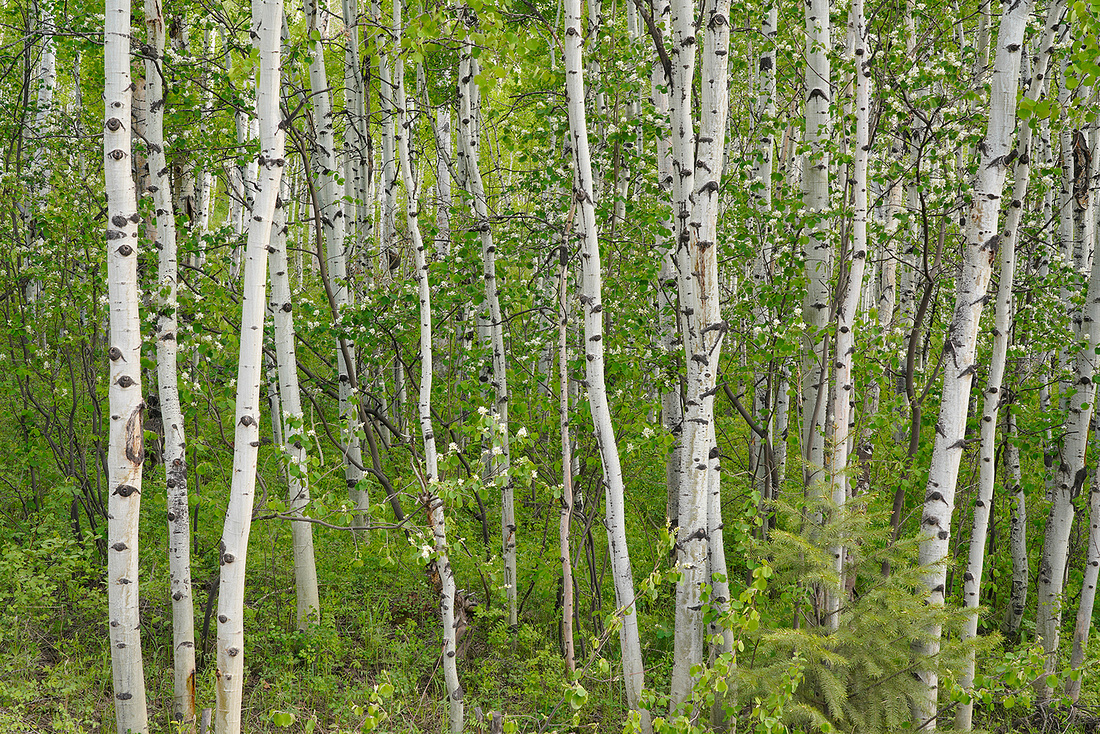 I found this location while looking for something totally different.  I've been told these are young flowering aspen trees.  Please correct me if I'm wrong. 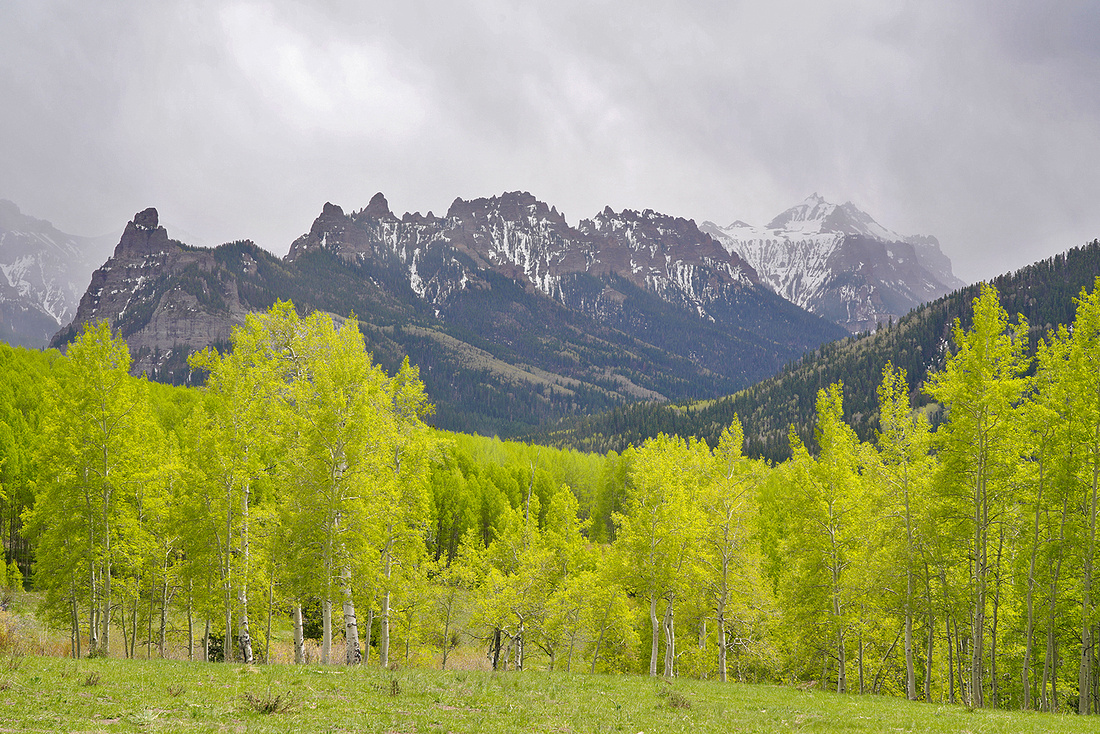 We spent a day over by Silverjack Reservoir checking out the fresh aspen leaves.  Unfortunately it was Memorial Day weekend and after a few short hours, we decided to come home due to the hoards of irresponsible tourists driving in the meadows, tearing down the roads at crazy speeds, and just disrespecting the enjoyment of others. 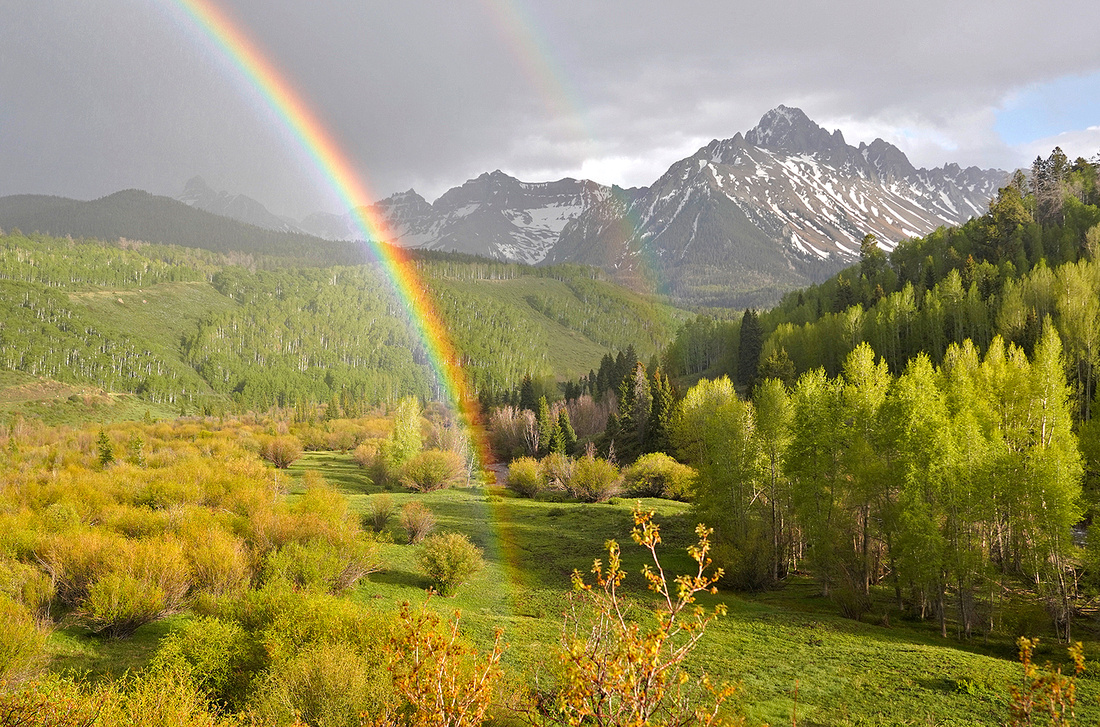 Mount Sneffels and rainbow in spring 1

Once in a while I get lucky - EXTREMELY LUCKY!  We had a clearing rainstorm just before sunset.  A friend and I were at the opposite end of this valley and raced to this location when we saw the storm starting to clear out. We were incredibly fortunate to get a few images before it dissipated. 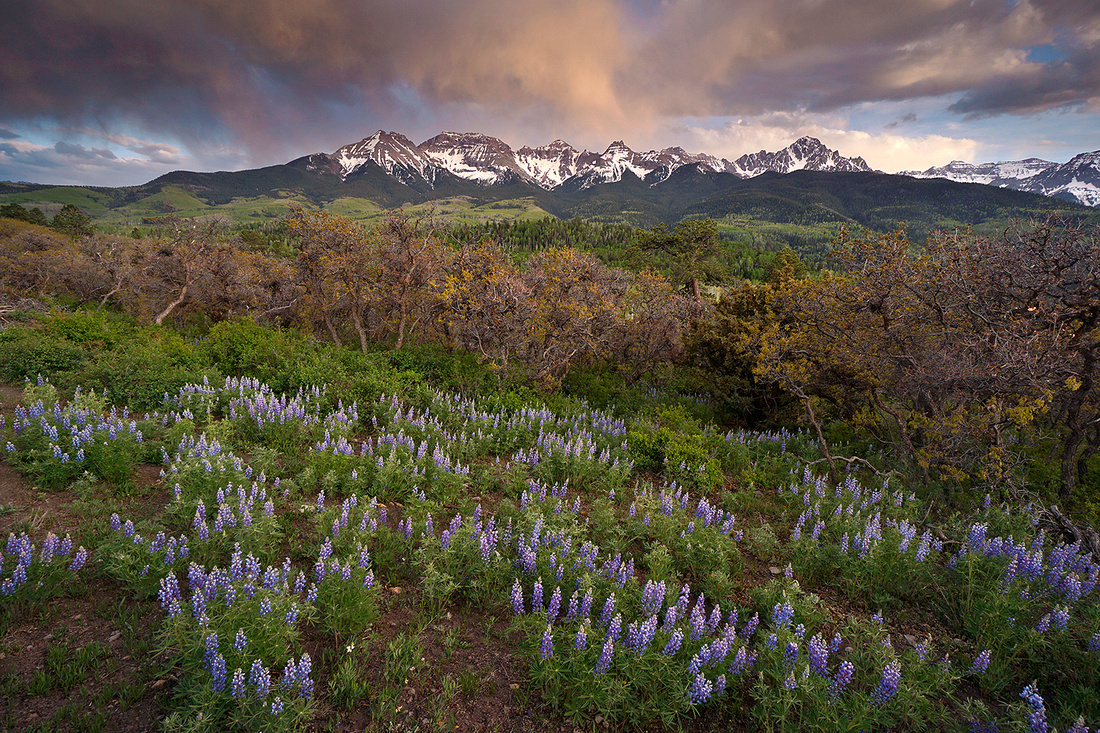 Mount Sneffels and lupine in spring 2

It took me 3 nights in a row going to this same location to get this image with the clearing storm at sunset and the peak lupine.

Mount Sneffels and lupine in spring 4

This image was taken as the very last light was hitting Mount Sneffels and also giving us some nice pink clouds. 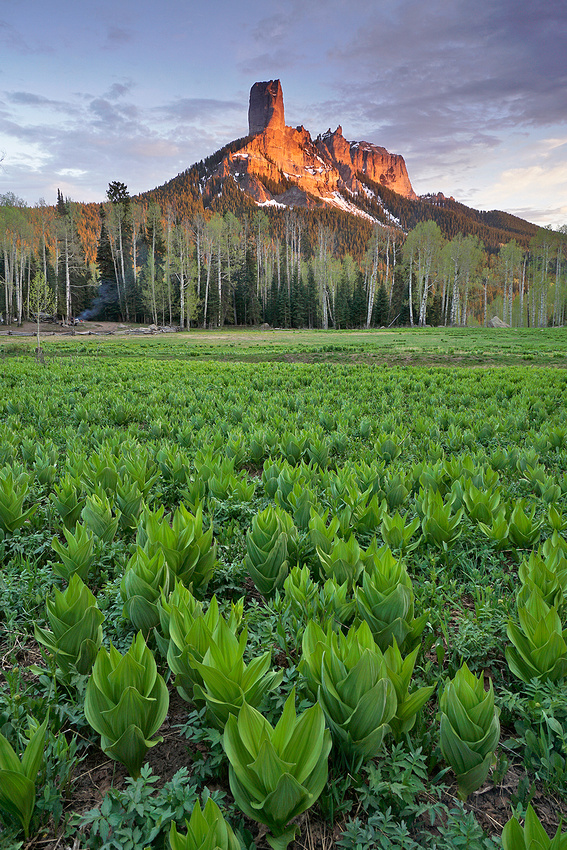 This particular meadow was made famous by the John Wayne movie True Grit.  This is chimney peak at sunset on Owl Creek Pass. 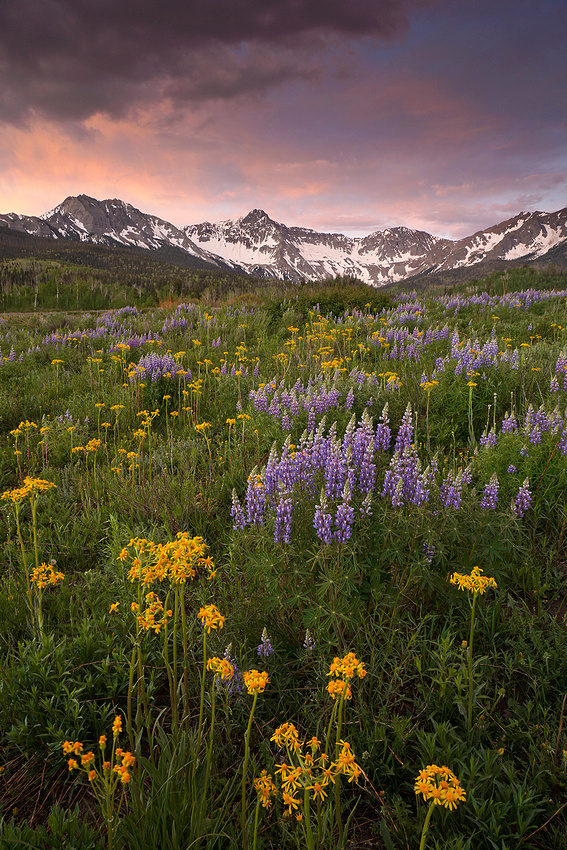 I liked how the yellow flowers were mixing in with the peak lupine for this image.  The pink sky at sunrise was an added bonus. 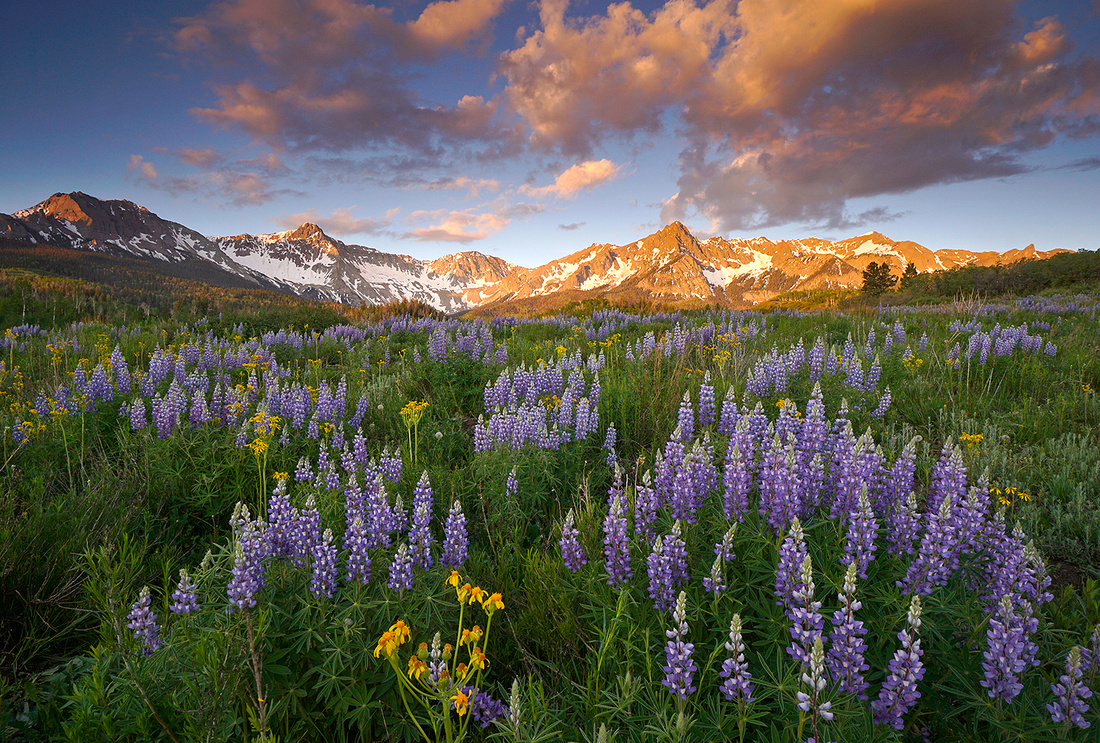 This is one of my favorite images so far this year.  It's definitely one of my best lupine shots.  To get the peak lupine, flaming pink clouds, and peaks lit up at the same time like they're on fire is extremely rare. 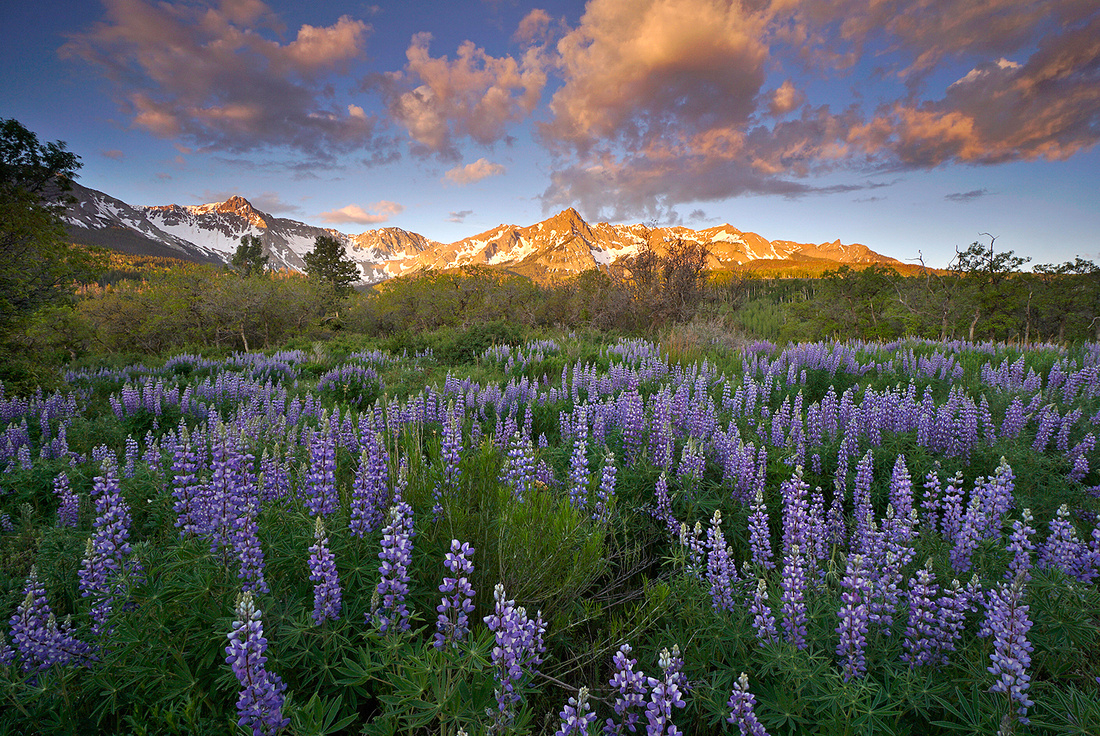 Taken the same morning as the previous image.  I had to run to this location to get it in time before the light on the peaks and clouds lost it's color. 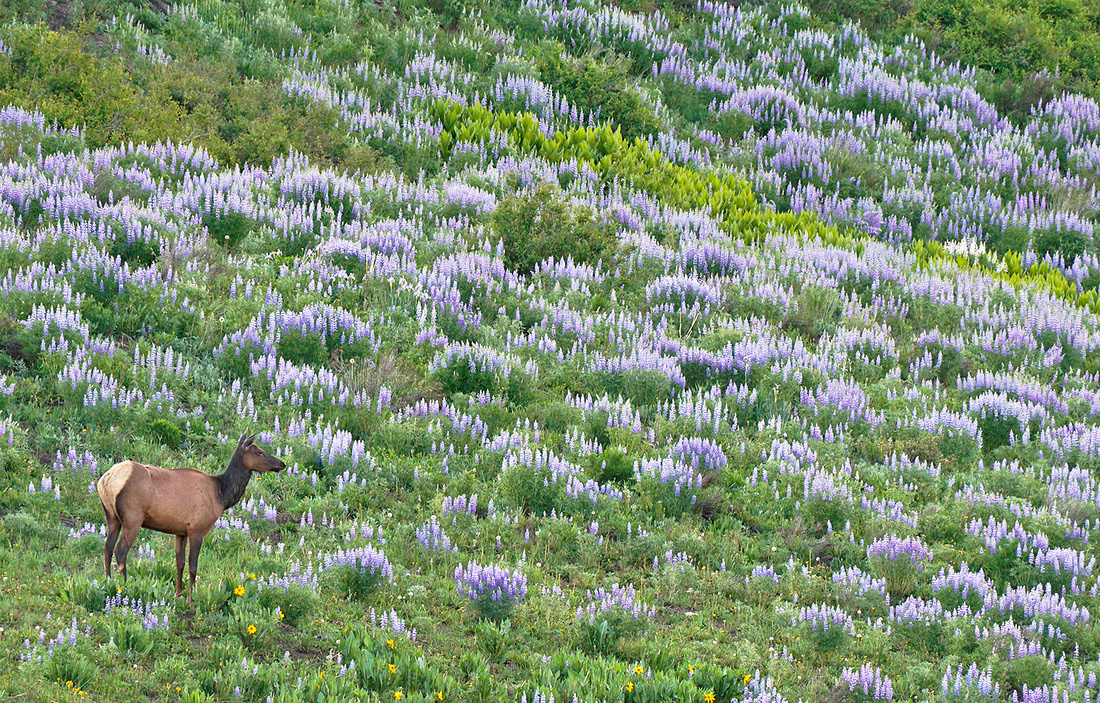 Another incredibly lucky shot.  I was at this location for almost an hour hoping the elk would walk into the lupine field.  I was able to capture several different images but this is my favorite. 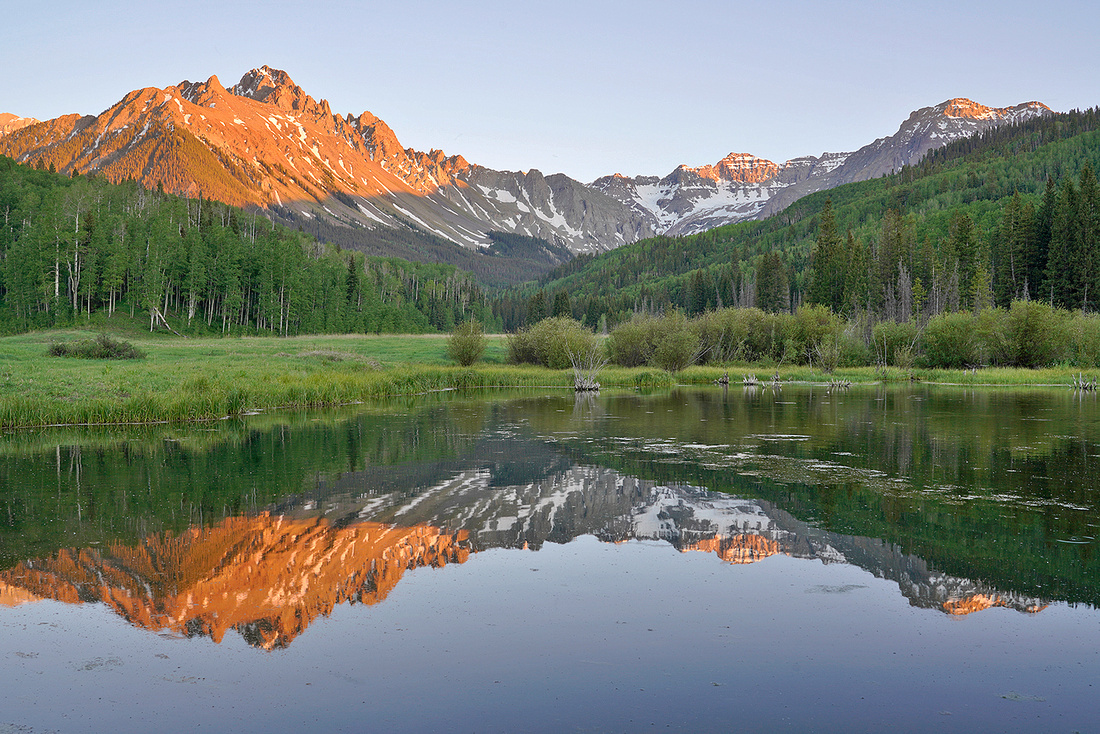 And finally, back to the Mount Sneffels reflection with great light on the peak at sunset.  Thanks for viewing and feel free to leave a comment!